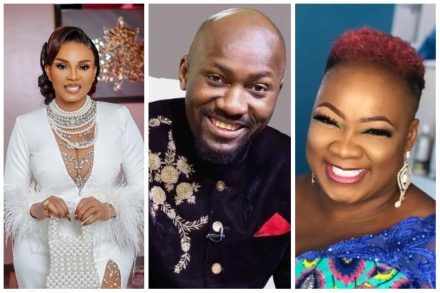 On Saturday night during an Instagram live session, Nollywood actress, Halima Abubakar, opened up a can of worms regarding her sexcapade with Apostle Suleman, including Iyabo Ojo and other actresses.

The interview was conducted by Princess and Iyabo Ojo felt uncomfortable after Halima mentioned her name.

Ojo is reportedly angry that Princess didn’t bother to ask more questions about her considering the role she played during Princess’s daughter’s rape case with Nollywood actor, Baba Ijesha.

However, many netizens applauded Princess for not probing further into Iyabo’s issue with Suleman unlike she did for the late Nigerian singer, Kafee.

But Iyabo Ojo, who has two children, took to her Instagram page to vent her anger.

Iyabo Ojo unfollowed Princess on the photo and video-sharing App, saying she has learned a hard way that a person should never take a bullet for someone or inherit their energy.

She noted that the situation hurt differently when someone goes beyond or above for another person and they later turn around to stab him/her.

She wrote: “O re ni wan… I have learned this in the hardest ways… Never inherit anyone’s energy, never risk your life or take a bullet for no one and nobody… never go beyond and above for anyone… because when you do and they turn around and stab you… it hurts differently. It’s ok to help but with great caution.”

However, many netizens berated Iyabo for unfollowing Princess, and directin a cryptic post at her.

They stressed that the situation would have been messier if another person handled the interview regarding Iyabo Ojo and Suleman.

Following the series of comments on her page, Iyabo Ojo made a U-turn as she deleted the shade and followed back Princess on Instagram. 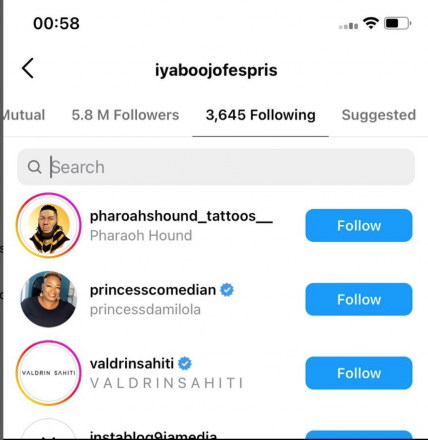