Comedy Checkup: Baba De Baba ‘Is Out’ With His Maiden Comedy Show 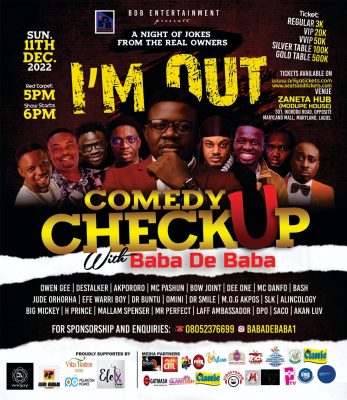 Creative humourist, Baba De Baba, a sensational comedian, who is known to be the only comedian in his generation of comedians that has not copied another comedian’s jokes is set to crack some ribs with his maiden edition of his Comedy Check-Up tagged ‘I Am Out!’

The master storyteller, as he is often called,  is arguably one of the few comedians whose comedy often gets ovations and cheerful roaring from every single crowd he faces.

Chidi Uzoma popularly called Baba De Baba has consistently emboldened comedians to maintain originality as it is one of the tools that promulgates the uniqueness of a comedian and make it facile to create a platform.

Talking the anecdotes about his job, how he arrived at having his own show, a platform to drive home the aforementioned points and create sustainability around original jokes.

“COMEDY CHECKUP, with Baba De Baba” is strictly for original comedians. Comedy Checkup is a comedy concert for lovers of comics gives to get familiar with the original owners of their favorite jokes and to also discover new original comedians.

A lot of creative comedians still use other people’s jokes on stage without giving credit to the begetter. But in Comedy Checkup nobody will be permitted to use another comedian’s material.

Comedy Checkup is the first Comedy show in Africa where the performing acts are told to do strictly their original jokes.

Don’t miss out on this pro-max comedy show…maximum security is guaranteed!