Child Loss: ‘We Have Made The Difficult But Necessary Decision’ – Davido Postponed The AWAY Festival The singer made this known through his management in a press statement shared online.

This comes barely two weeks after the singer and his fiancee, Chioma Rowland lost their three-year-old son to a drowning accident on Monday, 31st October 2022.

However, it has become necessary for the ‘Aye’ crooner to reschedule the AWAY festival because of the tragic incident.

The statement noted that postponing the event was a difficult decision but it was necessary and all ticket buyers will be honored on the new date.

Davido‘s management also apologized for disappointing his fans and promised to come back with a bigger and better show on Saturday, November 18, 2023.

The statement reads: “We have made the difficult but necessary decision to postpone A.W.A.Y Festival until Saturday, November 18, 2023.

“To all ticket buyers, your tickets will be honored for the 2023 date. We understand that you must be disappointed but we promise to come back with a bigger and better show.

“Thank you for understanding and we look forward to seeing you all in the near future. 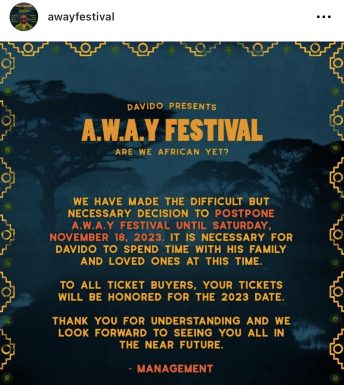 Davido, caused a stir on social media after unfollowing billionaire businessman, Femi Otedola and his daughter, DJ Cuppy on Instagram.

This is coming, days after the astute businessman splashed over two billion naira to rent a super yacht used to celebrate his 60th birthday party alongside his family members, while Davido, a family friend mourned his first son, Ifeanyi Adeleke.

The singer also took down all posts about his ‘Are We African Yet’ A.W.A.Y Festival that was set to take place on 18th November from his Instagram page. Other pinned posts were also yanked off the page.

The action has caused a stir amongst the singer’s fans on social media.

ebyprecious1 wrote: ”Situations will make you no your friends. wizkid postponed album lunch that’s says a lot about him.”

general_lostboy wrote: ‘Forget your differences when you hear they lost someone… it hits differently… send your condolences it doesn’t mean y’all will be back as friends … just your condolence it means alot.’