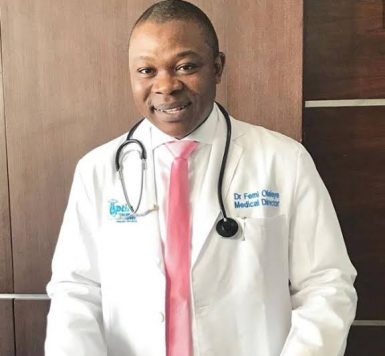 The medical director of Optimal cancer foundation, Lagos state, Dr. Femi Olaleye, was on Thursday, November 17, enmeshed in a fresh sex scandal involving him and a patient in his hospital.

Olaleye, who is a popular cancer care advocate, was seen taking off his trouser, and undressing his victim who was admitted in his medical facility, in a footage.

This is not the first time the medical practitioner would be involved in a scandal related to sexual harassment.

Recall that Olaleye, in September 2022, was accused of harassing a niece of his wife, Remi, for one year and nine months.

It was gathered that the minor was living with Olaleye when he introduced her to pornography.

Afterward, the medical practitioner, while taking advantage of the 15-year-old girl living in his residence, allegedly deflowered her and threatened the victim against informing anyone.

The 55-year-old man had perpetrated the crime for 21 months until his wife got to know about his illicit acts with her niece and subsequently reported it to the state police command for investigation.

Remi noted that the doctor threatened to deal with her for reporting the incident to the police.

The spokesperson for the state police command, Benjamin Hundeyin, confirmed that Olaleye’s wife reported the case to a station within the state, adding that the file is currently with its legal unit for legal advice.

Similarly, popular Nigerian actresses, Kate Henshaw and Damilola Adekoya, who is known for her stage name, Princess, released video clips about the matter two months ago.

Henshaw, in a footage, said that Olaleye confirmed the allegation to her during one of the cancer care outreaches held recently by the doctor’s organisation in the state.

She said that Remi sent her videos confirming that the doctor had been sleeping with her niece for a long time but said she could not post the video evidence due to the minor involved, according to Premium Times.

Henshaw stated that, “I sent him a message to express my disappointment and told him to go to submit himself to the authorities but his response was that he totally understands and added that he cannot remember admitting to me that he had sexual relations with anyone.”

Similarly, Princess, in a video clip, said that she got to know Olaleye as a result of his advocacy against breast cancer in Lagos state.

She added that she just found out that the doctor had been abusing his wife’s niece and was threatening her as well .

Princess said that, “He would threaten her wife’s niece with all fetish stuff, and warn her that she would die on the day she tells anyone.

“Afterward, he started giving her some pills to prevent pregnancies.

“The worst part of the story is that the case was reported and the next day, he was supposed to be charged to court but because he made an undertaking that it will not happen again, he was released.”