“JS, See You At The Court.” Halima Abubakar Dares Apostle Suleman After Lawsuit 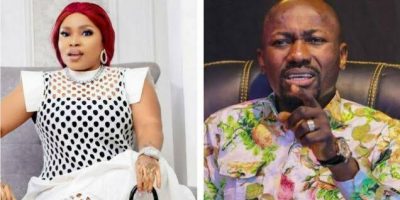 Apostle Suleiman, through his legal representatives, Ephesus Lex Attorneys & Solicitors, has issued the actress a cease and desist notice to refrain her from further damaging the reputation of their client.

For months unending,the Kogi State born Nollywood actress has been issuing series of threats on Instagram to the cleric whom she claimed was her lover.

The 37-year-old who labeled Apostle Suleiman as being ‘diabolic’ said she dated him sometime in the past because the cleric told her he was separated from his wife.

Halima had also dragged into the melee another actress by name Shan George, a colleague of hers into the saga, disclosing that she became seriously sick from a strange aliment after her affair with the Suleman went sour.

Responding to the allegations through his legal team, the cleric who had remained silent on his relationship with Halima threatened a defamation suit against her if she doesn’t desist from tarnishing his image, hence the cease and desist notice issued to her by his lawyers.

In a letter titled ‘Defamatory Statements Concerning Apostle Johnson Suleman; Notice to Cease and Desist’, dated September 28, 2022, Apostle Suleman warned the actress to discontinue her attacks on his personality or risk being dragged before the court of law.

“Dear Ms Halima Abubakar, Our client is an Apostle and Senior Pastor of the Omega Fire and Miracle Ministry International, with branches in all states of Nigeria and several countries of the world.
By virtue of his Apostolic caling and reach he has several millions of followers who look up to him and his ministry for spiritual guidance and direction.

“It is our brief that you caused to be published malicious, defamatory and demeaning statements about our client in several micro-blog sites, chiefly Gistlover, and your Instagram handle @halimabubakar, which have wider reach within Nigeria and the world.

“The statements, with their imputations, include the following; “Shan, you said you don’t think l am smart? lol ask sule. At your big age I’m glad gist lover sent that list. Thank you gist lover for calling me out. I for dey lie and lie for Sule. Never. God bless you gist lover. But your list smal for real! Johnson try me.”

The cleric isnt new to controversy.
Some years, he was linked to allegations of sexual involvement with a Canada-based singer Stephanie Otobo.

In July 2022, the cleric was in the news again after Gistlover a microblogging site claimed he had affair with some Nigerian actresses including Halima, Georgina Onuoha, Queen Nwokoye, Shan George, Iyabo Ojo, Angela Okorie, Vivian Metchie and Mercy Johnson with their names published on their site.

Apostle Suleman’s lawyers stated that failure by the actress to comply with their demands will lead to a civil suit against her.

“Whether there will be a public complaint to the police or other law enforcement agencies is not within our purview.

“We are hoping that she will listen to the voice of reason. If she does not, we will extend our actions to taking a writ against her,” the cleric lawyers added.

Suleman is also seeking through his legal representatives that Ms Abubakar must publish a retraction of her earlier statements in five national dailies within three days from Thursday.

They also demanded she must deliver a letter to the cleric giving her full assurance and undertaking that she will refrain from publishing previous and further defamatory statements against his person.

Despite the notice, Halima Abubakar’s posts against the cleric is still been viewed on the actress Instagram page which has a followership of 1 million people.

Refusing to be cowed by threats of legal fireworks from the cleric, Halima Abubakar, has reacted to the legal caution written against her by Apostle Johnson Suleman.

Speaking on her Instagram page, Halima said she will meet him in court.