The reality star, who is still on media rounds, has addressed the reports of domestic violence.

While still in the house, his alleged ex had claimed that the reality star physically assaulted her during their relationship.

Addressing it in his recent interview, Sheggz stated that he hasn’t seen the video.
The reality star noted how his name wasn’t mentioned in the video, hence, his reluctance to address it.

Sheggz, however, admitted that he knows the lady, but doesn’t understand why the blame is put on him since his name wasn’t mentioned.

I’ve dated amazing women in the past but right now I’m in a relationship and I’d like to focus on that.

Speaking on his relationship with Bemi, he said, “Like is said I didn’t hear my name so I don’t know why this is being put on me. I never said I don’t know the person”.

Reacting to it, Bemi hinted at spilling all about their relationship.

The make-up artist took to her Twitter page to urge the public to stay turn to her as she promises a tell-all.

“Just make sure you have enough data for this weekend sha”.

Recall that Sheggz had been a subject of criticism over his bullying tactics and violent behavior towards his girlfriend and co-housemates.

The reality star was exposed by his ex-girlfriend, Bemi for allegedly assaulting her.

She claimed that the reality star was aggressive towards her and was often maltreating her.

In a video posted on her YouTube page, she revealed how he once destroyed her laptop, and makeup kits and had choked her.

Although she didn’t mention her name, many concluded that she was referring to the reality star as he possessed such abusive behavior.

“He didn’t give a shit. Picked my laptop and threw it across the room, my make up was on the table, he swung it on the floor, my eye shadow broke and stained the carpet, he didn’t care. He has been quite aggressive – grabbing me and choking me on the bed. He grabbed my head, hit my head on the wall”. 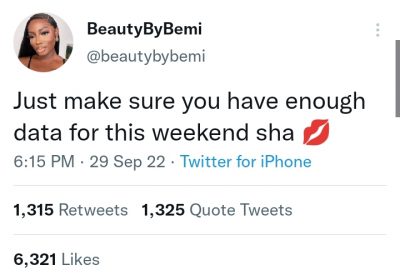