Nigerians Mock Bella Shmurda As He Performs With A Skirt, Unveils His New Name 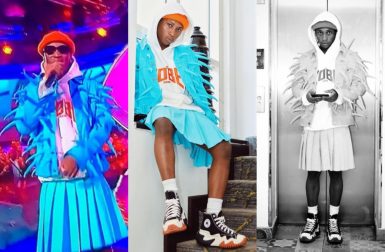 Award-winning singer, Bella Shmurda has caused a stir online after he stepped out to an event dressed in a skirt. The artiste was part of the guest performance at BBN live eviction show on Sunday evening, July 31st.

Bella surprised many and made headlines when he rocked the stage with a skirt.

The singer is currently trending on all social media platforms as Nigerians mock him for trying to initiate James Brown, Bobrisky, and another crossdresser. Others urged the singer to admit his sexuality.

Bella Shmurda’s controversial act has earned him a new name. Trust Nigerians, to add a new name to his birth name.The singer has been given the name, ‘Little Miss Bella’.

See some hilarious comments below,

_sheis.lola: And I should what a life

softigbogurl: Bella try change plug cause wetin be this??

Fans of Nigerian singer, Bella Shmurda had reacted to the statement the ‘Cash App’ crooner made on dropping out of University. The singer said he dropped out of the Lagos State University (LASU) to pursue his music career.

In one of his tweets, Shmurda disclosed that he failed some courses while at the institution, adding that the failure eventually led to his decision to quit school.
Reinforcing his point, the singer bragged that he had amassed 550 million streams.

“Thank God I was stubborn and I never got to pass those exams then. Big thanks to @Poco__lee for telling me to do that vision2020 viral video, shoutout to @Olamide for his listening ears and open hands for upcoming acts”.

As expected, his statement triggered diverse comments from fans.