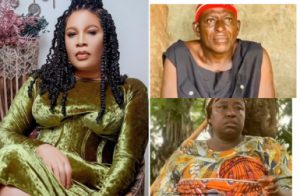 Nollywood actress, Monalisa Chinda has weighed in to the Kidnaping of her colleagues, Cynthia Okereke and Clemson Cornell by unknown gunmen.

According to report, the abductors of veterans, Cynthia Okereke and Clemson Cornell demanded for a sum of $100,000 for the release of the captives.

The kidnappers reportedly contacted family members of the captives about 24 hours after they were declared missing.

The duo were said to have gone on a shooting assignment before the were declared missing.

Both actors are renowned for starring in movies shot in Enugu and Delta states. Joining her voice with that of her worried colleagues, Monalisa wondered why people think actors have money despite their life struggles.

She went on to suggest a way, the kidnappers can be caught.

According to Monalisa, the numbers the abductors used to communicate with them can easily be traced.

I don’t understand how people would think that Actors have money… with the paltry sum we receive as fees? The struggle through life vicissitudes, health issues etc we face every now n then???
$100k from where?
The numbers that was used to communicate with them can easily be traced.. I mean..
The search is on please
@actorsguildofnigeria
Let’s keep reposting please