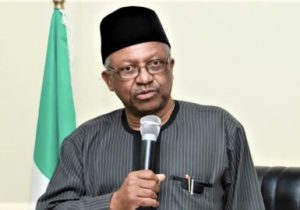 About 80,000 child deaths could be prevented annually when optimal breastfeeding is practiced, the Minister of Health, Dr. Osagie Ehanire has said.

Dr. Ehanire said exclusive breastfeeding cannot be overemphasised, noting that it is the foundation of child survival, health, growth, and development, Ehanire stated this in his speech at the flag-off ceremony to mark the 2022 World Breastfeeding Week.

The World Breastfeeding Week is themed ‘Step up for Breastfeeding: Educate and Support’. The minister, who was represented by the Minister of State for Health, Joseph Ekumankama at the ceremony stressed the benefits of breastfeeding to both mother and baby.

The minister, in a press statement made available to our correspondent, said breastfeeding provides every child with the best possible start in life.
“It delivers health, nutritional and emotional benefits to both mother and child. It also forms part of a sustainable food system.

Breastfed babies have stronger immunity, reduced risk of infections and many childhood illnesses, and may also have longer-term health benefits including reduced risk of overweight and obesity in childhood and adolescence.

“Studies have shown that obesity rates are 15-30 per cent lower in breastfed babies compared to formula-fed babies. Again, about 80,000 child deaths are reported to be prevented annually when optimal breastfeeding is practiced.

“Mothers also benefit enormously from breastfeeding. It helps to prevent post-partum bleeding and lowers a woman’s risk of breast and ovarian cancers.
“It can even reduce the risk of developing osteoporosis, diabetes, cardiovascular disease, high blood pressure, high cholesterol, and it lessens the severity of postpartum depression.

“The inadequate feeding practices and malnutrition which contribute to over 50 per cent of under 5 children mortality with 2/3 of these deaths occurring in the first year of life are closely related to poor breastfeeding practices.
“As a nation, breastfeeding is one of the smartest investments we can make towards human capital development.

“It offers children unparalleled health and brain-building benefits. It has the power to save the lives of women and children throughout the country and the power to help our national economy to grow through lower health care costs and a smarter workforce,” the statement said.

“The FMOH through the National Agency for Food and Drugs Administration and Control and other stakeholders will continue to enforce the Code for the marketing of Breast milk Substitutes to address threats which unwholesome marketing poses to optimal breastfeeding practice in Nigeria.

“This is fundamental to protecting the public and healthcare staff from inappropriate marketing by infant formula companies. It is critical that the entire support system, particularly healthcare staff that is in contact with breastfeeding mothers understand the Code and their role in its implementation. Without such knowledge, they are vulnerable to direct and indirect marketing.

“Government, through the Ministry of Health will continue to invest in consistent training programmes for different levels of health professionals – doctors, nurses, midwives, community health workers, and others.

This is because health professionals play a critical role in supporting women to breastfeed, and to do this effectively they need appropriate knowledge, such as knowledge of the health outcomes associated with different methods of infant feeding and the physiological process of lactation, combined with positive, non-judgmental attitudes and effective communication and practical support skills,” it noted.