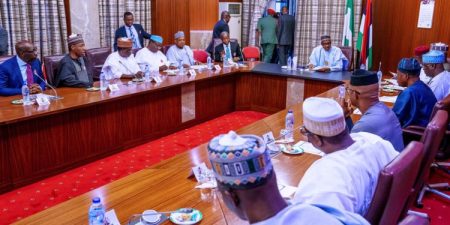 The state chief executives at a teleconference meeting of the Nigeria Governors’ Forum (NGF) on Tuesday, argued that not only did the Bill inadequately address the interests of the states, but its propositions are also inconsistent with the constitution.

In a communique issued at the end of the meeting, the governors “argued that the Bill does not adequately address the interests of the states and is inconsistent with the provisions of the Constitution of the Federal Republic of Nigeria.”

The governors, who entertained presentations from the Minister of Agriculture and Rural Development, Mohammad Abubakar; Minister of Health, Osagie Ehanire and Minister of Finance, Budget & National Planning, Mrs. (Dr.) Zainab Shamsuna Ahmed, agreed to cooperate with the Federal Government on measures to address growing health, economic and food challenges.

Part of the communique, signed by the NGF Chairman, Governor Kayode Fayemi of Ekiti, reads: “The Forum received presentations from the Honourable Minister of Agriculture and Rural Development Dr. Mohammad Mahmood Abubakar, on the Livestock Productivity and Resilience Support Project (LPRES) – a 6-year US$500 million World Bank programme aimed at improving the productivity, commercialization, and resilience of targeted livestock production systems in Nigeria.

Governors unanimously decided to spearhead the programme in their states, particularly in areas such as institutional and innovation systems strengthening, livestock value-chain enhancement, crisis prevention and conflict mitigation, and project coordination.

Following the presentation, Governors had a robust discussion with priority given to the government’s response to the fallouts of the Russia-Ukraine war (including inflation and the rising food and nutrition crises), the continued impact of the PMS subsidy on the fiscal headroom of governments, implications of NNPC’s new transition on federation revenues, as well as the widening divergence between the official and parallel market rate of the dollar on the currency.