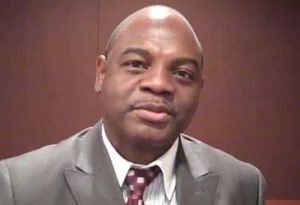 Secretary of the Tertiary Education Trust Fund (TETFUND), has been accused of running down the agency through unwholesome practices.

According to a report by SaharaReporters, the medium said it had in 2020 done an extensive report on how Echono as the then permanent secretary of the Federal Ministry of Education worked with the former Acting Registrar of NECO, Abubakar Gana, his Special Assistant, one Ibrahim Peter Alih, as well as Chairman of the Governing Board of council, Dr Abubakar Sadeeq, to perpetrate an alleged N6billion contract fraud.

Echono was then accused of providing tacit support for the officials of NECO to perpetuate corruption at the council, while using his position as a very senior officer in the Ministry charged with the responsibility of supervising NECO.

Despite the allegations, Echono was appointed in March by President Muhammadu Buhari as the Executive Secretary of TETFUND.

Sources divulged that Echono has allegedly turned the agency into a fiefdom where contract splitting and padding was the order of the day.

“The situation in TETFUND in less than four months is worrisome; the ES has done what no other chief executive has done in terms of splitting contracts to favour his cronies and fronts. A situation where the ES brags about extensive knowledge of procurement is disgusting. I can say that the rot he perpetuated while he was Permanent Secretary in the Education Ministry is what he is repeating here,” one of the sources said.

“One of the antics of the ES of TETFUND is insisting that most TETFUND projects are executed by firms he recommended. He has a list of firms under his direct control that he uses in executing TETFUND projects.

“There is a list of anointed firms that must execute projects. In some instances, these firms are not qualified and what happens is that they end up engaging firms with capacity but for a lesser fee. One of the federal universities in the Southern part of the country was a case where TETFUND released the sum of 250 million for constructing twin lecture theatres. The firm that was awarded the contract later engaged another firm for the same project at the sum of 150 million,” another source noted.

The source further added that while as Permanent Secretary, the major firms that handled contracts were recommended by him.

“Take the case of the National Examination Council, where he provided support for the officials of NECO to perpetrate corruption running into billions through the ‘Direct Procurement Method’ without regard to approval thresholds and without getting approvals from the Parastatal Tenders Board, Ministerial Tenders Board or the Federal Executive Council/Bureau of Public Procurement.

“Arc Sonny Echono was the brain behind the crisis at NECO during the era of Abubakar Gana as Acting Registrar of NECO. Gana awarded contracts to companies recommended to him by the Permanent Secretary and Chairman of the governing board and those close to him in a blatant abuse of due process and all known extant laws and financial regulations,” he said.

It was gathered that some top members of Academic Staff Union of Universities are moving for the sack of Echono over “non-qualification and sleaze”.

The lecturers claimed the Education Minister, Adamu Adamu bent the rules in recommending him for the TETFUND job.

“After retirement, he lobbied extensively to get the TETFUND job through some powerful vice-chancellors with whom he has had dealings and his closeness to the education minister. And I can tell you that the sleaze has continued in his usual manner of receiving kickbacks from contractors, influencing contract processes, to mention but a few.”

“I am afraid if things continue this way, TETFUND might lose focus and monies meant for interventions in tertiary institutions might end up in private pockets. I can bet that should the anti-graft agencies beam the searchlight on the activities of TETFUND; the discoveries would be mindboggling,” another source said.

Echono was at a time Director of procurement in the Ministries of Defence, Environment, Agriculture and Water Resources before he was appointed Permanent Secretary in 2014

A source, who revealed the NECO contract fraud, had told SaharaReporters that the indefinite suspension of the former Registrar, Prof Charles Uwakwe on May 10, 2018 provided Echono the opportunity to closely interfere in the procurement process of the examination council using Alih as his proxy.
The source had claimed the former Permanent Secretary and Sadeeq facilitated the appointment of Alih as the Special Assistant to Gana.

“The staff of NECO are now expressing disappointment with the fact that Echono and the Chairman of the Governing Board have equally imposed Alih on the new Registrar, Prof Godswill Obioma, thereby making it practically impossible for him to operate freely as the Chief Executive Officer of the council,” the source had claimed.

“Following series of petitions by some staff of NECO on the monumental act of corruption perpetrated by the Acting Registrar, the Presidential Initiative on Continuous Audit and the Office of the Auditor-General of the Federation have launched massive investigations into the corruption in NECO, and Echono is also said to have been making overtures to the Auditor-General of the Federation and the Permanent Secretary (Special Duties) in the Federal Ministry of Finance, Budget and National Planning, who are his contemporaries/colleagues in the federal civil service and members of the Service Wide, to suppress the investigations. PICA is under the supervision of the Permanent Secretary (Special Duties).”