Over 30 killed, As Vehicles Burnt In Kaduna Auto Crash

The number of 30 persons were feared dead in an auto crash along Zaria-Kano Expressway, in Kaduna on Thursday. The accident occurred around 5.30pm near Hawan Mai Mashi in Makarfi Local Government Area of Kaduna State.

Abdurahman Yakasai, Assistant Corps Commander of the Federal Road Safety Corps, in charge of Zaria Zone, confirmed the accident to newsmen. He said the auto crash involved two Toyota 18-Seater buses and a Volkswagen Gulf, adding that it was caused by speeding and dangerous overtaking.

He said, “Those that sustained injuries have been rushed to Ahmadu Bello University Teaching Hospital (ABUTH) Shika Zaria by our men, while the remains of the deceased were also evacuated and deposited at the hospital morgue.”

The unit commander said the FRSC had yet to ascertain the number plates of the vehicles because they were burnt to ashes. 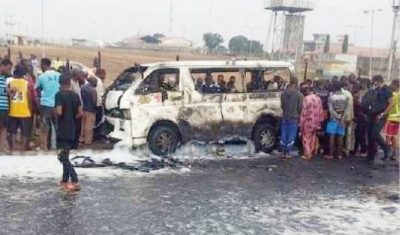 He however said efforts were being made to obtain the manifest and details of the victims.

Meanwhile, an eyewitness, Suleiman Mohammed, told our correspondent that due to the high flame that engulfed the three vehicles, people could barely rescue the victims.