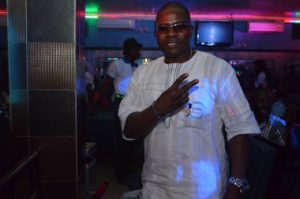 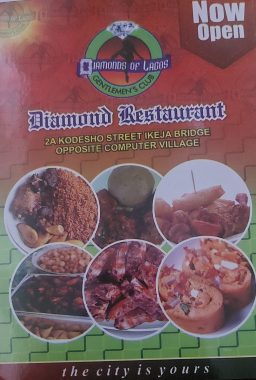 The new eatery, Diamond Restaurant is located at 2A Kodesho Street, Ikeja Bridge, Opposite Computer Village, and for those who have visited the place, the food there is homemade.

Ayo Aina is not only operating clubs but has now fully delved into ‘stomach infrastructure’ contributing to the social life and eatery business of Ikeja, Lagos. now a restaurant too.

The new restaurant has already kicked off as there are a lot of mouth-watering African delicacies available for you with waitresses who are full of polite concern for the well-being of their customers.

Diamonds of Lagos is simply a restaurant that presents itself as a relaxation outlet for its numerous customers.
According to the restaurant menu, they offer native African dishes like Afang Soup, Vegetable Soup with fufu, Starch and Banga soup and other native dishes. Their food is very well-prepared and affordable. They operate a-24 hour customer service.

“The restaurant happens to be in a very open area of Ikeja. This is something really good for a place as busy as Ikeja, where workers and business owners who barely have time to cook for themselves are meant to be. We also deliver at your door-stop with just a phone call. It is a home away from home,” Ayo Aina, the runner of the place told us.