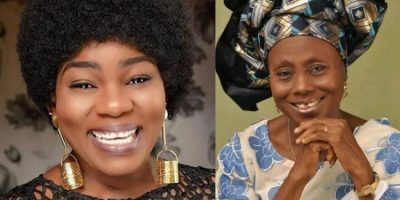 Onayiga, a veteran Nigerian actress popular for her role as ‘Ireti’ in the hit sitcom, Fuji House of Commotion, died in the early hours of Monday in Lagos while Ameh was confirmed death in Warri, Delta State on Sunday.

According to him, Onayiga passed away following a two-week long admission to the intensive care unit of the Lagos State University Teaching Hospital.

“I have just been informed that the accomplished stage and screen actress and a fellow of Theatre Arts Auntie Sola Awojobi Onayiga have passed on,” said Oloketuyi via WhatsApp.

“Auntie Sola, who is best known for living delightfully the role of Ireti aka cooking practicals in the defunct television sitcom ‘CHECKMATE’ Reportedly passed on this morning,” he said.

She reportedly died around 11 pm on Sunday.

She was reported to have slumped and thereafter rushed to the Nigerian National Petroleum Corporation’s hospital but passed on before she could get help.