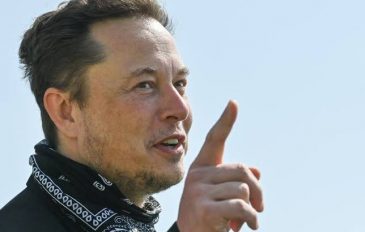 Elon Musk, Tesla CEO, has denied he had an affair with Sergey Brin’s wife, after the Wall Street Journal reported that the liaison led the Google co-founder to order his advisers to sell his investments in Musk’s companies.

Musk, the co-founder of Tesla Inc., had an alleged liaison in early December in Miami with Brin’s wife Nicole Shanahan, the Journal said, citing unidentified people familiar with the matter. That ended the long friendship between Musk, 51, and Brin, who helped support the electric carmaker during the 2008 financial crisis. Brin, 48, filed for divorce from Shanahan in January.

Musk said in a post on Twitter, where he has more than 100 million followers, that the Journal’s story was untrue, saying he’s seen Brin’s wife twice in three years, both times in the presence of other people, and there was “nothing romantic” between the pair. He also added that he’s still friends with Brin.

“This is total bs. Sergey and I are friends and were at a party together last night!,” he wrote.“I’ve only seen Nicole twice in three years, both times with many other people around. Nothing romantic.” 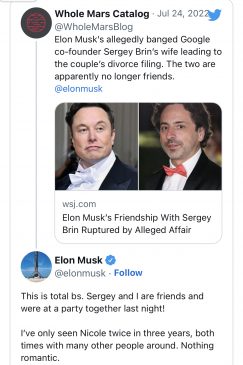 Brin had instructed his advisers to sell his personal investments in Musk’s companies in recent months after learning that he had a brief affair with his wife, according to the Journal. The size of Brin’s personal investments in Musk’s companies isn’t known, and it’s unclear whether there have been any sales, the newspaper said.