Some Nollywood star actors are set to feature in a new Indian movie….
Hamisha Daryani Ahuja, a Bollywood actress and filmmaker, is preparing to make history by bringing some Nigerian actors/comedians and Bollywood stars to appear in one of her films.

Hamisha is the executive producer and director of “Namaste Wahala,” an Indian film that launched and went viral last year. The new endeavour, according to her, will bring some Nigerian actors and comedians to India. And the project is set to begin next month. Below is her Instagram post regarding the film.
So far, three Nollywood actors and one Nigerian comedian have been cast in the upcoming film, and they are:

Rahama Sadau is a Nollywood actress who began her career in the Kannywood/Hausa film business in Kano State. Rahama revealed on her Facebook page that she would appear in an Indian film produced by Hamisha Daryani Ahuja. Rahama expressed her gratitude for the invitation.

Check out what she shared on her Facebook page below: Broda Shaggi is a Nigerian comedian actor, and musician born Samuel Animashaun Perry. He is one of the actors in Hamisha’s new film. The actor posted this on his Instagram,

as shown in the screenshot below: 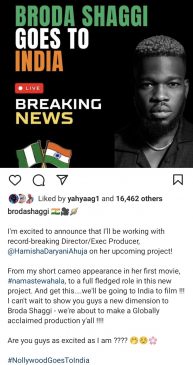 Sola Sobowale is a Nollywood film actress, producer, and director from Nigeria.
The actress from Ondo State was also invited to appear in the upcoming Indian film.
Sola Bowale is another well-known Nollywood actress who will also appear in a new Indian film by Hamisha.

Look at the screenshot below to see what she wrote: 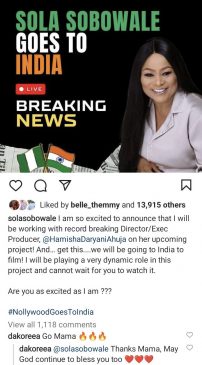 Richard is a Nollywood actor who will also collaborate with Rahama Sadau, Broda Shaggi, and others in India on a new Hindi film. 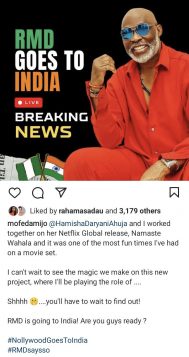 So far, Hamisha Daryani Ahuja has chosen the aforementioned Nigerian actors for her forthcoming film. She may, however, choose more from Nigeria.