Fashola: APC Govt Has Served Efficiently, Nigerians Will Re-Elect Us In 2023 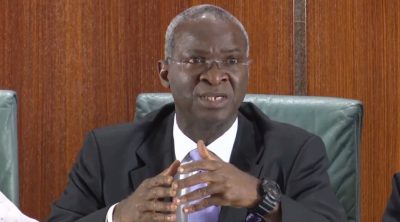 Babatunde Fashola, minister of works and housing, says right-thinking Nigerians will vote for the All Progressives Congressional  (APC) in the 2023 general election. Fashola said this when he featured on Sunday Politics, a Channels TV programme.

“On a very deep reflection, right-thinking and well-meaning Nigerians will re-elect our party into governance, I am optimistic about that.
I think we have served this country as efficiently as we can, in the most difficult time. No government has faced COVID; we did. No government has faced a global scarcity of resources caused by a war in which we are not involved; we did and we are still managing that economy, providing hope and sustainability.I’m optimistic that we will win.”

The minister who also spoke on the recent spat between Bola Tinubu, presidential candidate of the APC, and Atiku Abubakar, standard bearer of the PDP, and advised them to settle their differences. “The exchange of words, at best, I will call it a stumble. They should quickly recalibrate,” he said.