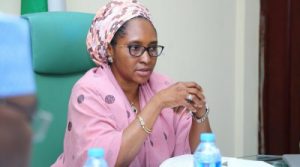 Nigeria’s fiscal position worsened in the first four months of the year as the cost of repaying debt surpassed the government’s revenue in the first quarter of 2022. According to details of the 2022 fiscal performance report for January through April, Nigeria’s total revenue stood at N1.63 trillion while debt servicing stood at N1.94 trillion, showing a variance of over N300 billion.

Nigeria’s Minister of Finance, Budget and National Planning, Zainab Ahmed, on Thursday warned that urgent action is needed to address the nation’s revenue challenge and expenditure efficiency at both the national and sub-national levels.

The report showed that gross oil and gas federation revenue for the first four months of the year was projected at N3.12 trillion but as at April 30, only N1.23 trillion was realised, representing a mere 39% performance.

Despite higher oil prices, the report showed that oil revenue underperformed due to significant oil production shortfalls such as shut-ins resulting from pipeline vandalism and crude oil theft as well as high petrol subsidy cost due to higher landing costs of imported products. However, non-oil taxes trailed targets marginally, with average performance of 92.6%.

“Revenue performance is expected to improve in the second half of 2022 as a result of concerted efforts to address the oil theft and pipeline vandalism, the report said. It added that there is also seasonality to some of the non-oil taxes, which means that the nation expects to collect significantly more in the second half of the year.

In the first quarter of 2020, Nigeria’s debt service as a percentage of revenue rose to 99%, according to the Medium-Term Expenditure Framework and Fiscal Strategy (MTEF/FSP) report released by the Federal Ministry of Finance, Budget, and National Planning.

The data showed that in Q1 2020, Nigeria incurred a total sum of N943.12 billion in debt service while the Nigerian government retained revenue at N950.56 billion. In effect, Nigeria’s debt service to revenue was estimated to be 99% during the period.

Customs collections (made up of import duties, excise and fees, as well as federation account special levies) trailed target by N76.77 billion (25.42 percent) while the other revenues amounted to N664.64 billion, of which independent revenue was N394.09 billion.

The report noted that for Nigeria, “fiscal risks are somewhat elevated”, following weaker-than-expected domestic economic performance and structural issues in the domestic economy. It warned that revenue generation remains the major fiscal constraint of the nation and the systemic resource mobilization problem has been compounded by recent economic recessions.

The underlying factors also include the Russia and Ukraine war, which the report said has assumed a new and worrisome dimension with severe implications on food and energy prices. It listed the resurgence of COVID -19 in some major economies, which has led to slowdown in economic activities in those countries; as well as renewed elevated inflation in most economies, prompting monetary tightening in these economies with the inherent negative impact on capital inflow to emerging markets economies. Also identified as a contributing factor is the challenging domestic macroeconomic and business environment and the negative impact of insecurity on the domestic economy.

“Efforts will however focus on improving tax administration and collection efficiency,” the report said. “Crude oil production challenges and PMS subsidy deductions by NNPC constitute significant threat to the achievement of our revenue growth targets, as seen in the 2022 Performance up to April. Bold, decisive and urgent action is urgently required to address revenue underperformance and expenditure efficiency at national & sub-national levels.”

Nigeria’s public debt climbs to N41.6trn Meanwhile, Nigeria’s total public debt stock, comprising the debt obligations of the federal government, states and the Federal Capital Territory (FCT) rose from N39.56 trillion in December 2021 to N41.60 trillion ($100.07 billion) in the first three months of 2022 (January to March), the Debt Management Office (DMO) revealed yesterday. In addition, the domestic debt service obligations of the federal government stood at N668,685, 710,112.98 in the first three months of 2022.

According to the DMO, with the increase in the country’s debt profile, its total public debt-to-gross domestic product (GDP) now stands at 23.27 per cent, as against 22.43 per cent December 31, 2021. The DMO, in a statement posted on its website explained: “The amount represented the domestic and external debt stocks of the Federal Government of Nigeria, the 36 state governments and the Federal Capital Territory. The comparative figures for December 31, 2021, were N39.56 trillion or $95.78 billion.”

The total public debt stock, the agency said, included new domestic borrowing by the FGN to partly finance the deficit in the 2022 Appropriation Act, the $1.25 billion Eurobond issued in March 2022 and disbursements by multilateral and bilateral lenders. According to data posted by the DMO, the federal government’s total domestic debt as at March 31, 2022, stood at N20.144 trillion (N20,144,027,724,703).

There was no debt service pay out for FGN Sukuk Rentals in January and February, but in March, a total of N8,167, 315,066.60 was paid. Meanwhile, Nigeria’s external debt stock as at March 31, 2022 stood at $39,969.19 billion. This comprised debts for multilateral and bilateral creditors as well as commercial loans.