2023: Don’t Distract Me With Politics, Vote Your Conscience – Adeboye 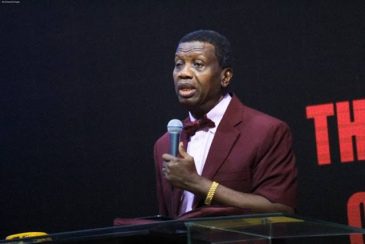 Pastor Enoch Adeboye, the general overseer of the Redeemed Christian Church of God (RCCG), has told his church members not to distract his attention with politics, as the country heads into the 2023 general election.
The clergy said that they can vote for any candidate of their choice in next year’s elections. This comes amidst controversies surrounding the Muslim-Muslim ticket adopted by the All Progressives Congress (APC) and the position of the Christian Association of Nigeria (CAN).

Adeboye, in a viral video on social media during sermon told his congregation not to distract him as his assignment had nothing to do with partisan politics. “My assignment is to pray for you, including Nigeria, my assignment has nothing to do with partisan politics. Don’t distract my attention. You will bear me witness, those of you who are genuine members of Redeemed Christian Church of God, I have never told you this is the person you should vote for. Have I ever told you that whether in secret or in open? Never. I have never said this is the party you should belong to, I have never said it and I will never say it. And you know why, because in Redeemed Christian Church of God, every party is heavily represented. Every one, APC, PDP, APGA, Labour Party, etc,” he said.

Adeboye also disclosed the reason he had never voted in any election in Nigeria. According to him, “The only reason I have never voted is that if I vote for anyone, I will be unjust to the rest of my children, I am the father of all and I like it that way. All I am saying and I am saying it loud and clear, as a Nigerian, everyone of you, you are Nigerians before you became a Christian, because nobody is born a Christian. You are a true Christian because you gave your life to Jesus Christ.

Before you became a Christian, you are a Nigerian, you have a duty to your country, to register, to vote, to make sure that your vote should count, you have a duty to belong to any party of your choice at the very grassroots, you can’t sit down, fold your hand, refuse to vote and then begin to complain about the government.

What were you doing when they were voting? They were voting, you sat down at home, you did not register and then some people came round and selected for you whether at the gubernatorial level, presidential level or local government level. They chose for you because you refuse to do anything and then you begin to complain. You must register, you must vote, you must sit down there after you have voted until they count the vote, you must know who they said won. You must make sure there is no more rigging in Nigeria. I don’t care which is your party, I don’t care who you vote for but do your duty, that is what I am asking you to do and you must do it.”