during the invasion, the policemen and the land grabbers, who were reportedly sponsored by members of a Lagos family, stormed the estate with bulldozers to excavate the wetland, which affected the foundation of many buildings on the estate.

During a visit to the estate, our correspondent observed that the fences of some buildings had collapsed, while the foundation of other buildings had sunk due to the continued exercise.

A landlord, Bolaji Omotoso, whose house is on the brink of collapsing, said complaints to the state government on the matter had gone unheeded.

He said, “The activities of the land grabbers clearing the wetland beside my house had been going on unabated despite complaints by me and the association to the state government. They said they would do something, but we realised that the activities continued. The excavators have cleared the base which holds the fence of my building, so the fence collapsed. The house is now affected. It is sad.”

An 82-year-old landlord, Mrs Reginald Pitan, said, “This is corruption. If I had the power, I would tell everybody involved that they are corrupt. The government should not turn us into hoodlums to fight for ourselves.”

A resident, Pastor Bisi Olowoyo, lamented the environmental impact of the excavation of the wetland, which he said was intended for the development of a housing project.

These land grabbers act with impunity. If there must be another house scheme here, at least, there should be proper studies and environmental impact assessment tests,” he added.

Addressing journalists on Wednesday, the Chairman, Magodo Residents’ Association, Bajo Osinubi, lamented the continued excavation that had weakened many buildings on the estate. 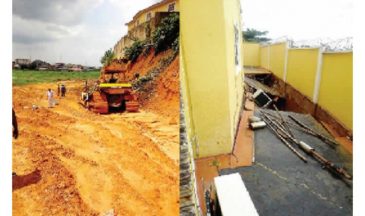