Bianca Ojukwu, the widow of the Biafran warlord, Chukwuemeka Odumegwu-Ojukwu, has spoken on the ‘stinginess’ of the Labour Party presidential candidate, Peter Obi.

She was reacting to the outburst by the Spiritual Director of Adoration Ministry Enugu, Rev. Fr. Ejike Mbaka, who said the former Anambra State governor cannot win next year’s general election because he is “stingy”.

While speaking during one of his programmes in Enugu, the cleric maintained that it would be impossible for Obi to become Nigeria’s president, adding that an old man president is better than a ‘stingy young man’.

In a Facebook post titled ‘On Peter Obi’s supposed stinginess’ on Thursday, Bianca shared an encounter she had with Obi in 2009 while the latter was still Anambra’s governor. 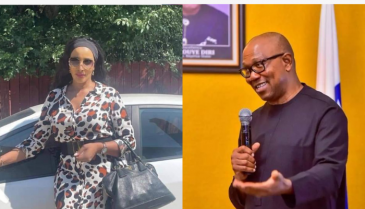 She wrote, “Sometime in 2009, ‘Mr’(as he preferred to be addressed) Peter Obi, Governor Of Anambra State at the time, visited Dim Chukwuemeka Odumegwu Ojukwu and myself at Dallas, Texas. He came to deliver a get-well message from Dr Goodluck Jonathan and was billed to attend a black-tie event at the Dallas Marriot.

“Curiously, he flew into Dallas airport with one small carry-on luggage which he insisted on wheeling around himself, and on getting to our residence requested to freshen up.