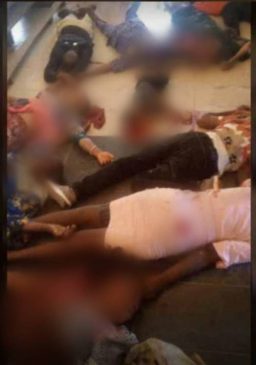 Reports suggest that dozens of worshippers have died and several others have been left injured following the explosion at the church which is situated close to the palace of the Olowo of Owo. The popular community in Ondo state was under attack by unknown gunmen numbering up to 50, who invaded a catholic church and killed many worshippers on Sunday, June 4, 2022…
The name of the church was given as St. Francis Catholic Church, Owo.
News has it that no fewer than 50 worshippers were either shot dead or murdered with different weapons, while others were seriously injured.

The injured persons, according to an eyewitness have been taken to nearby hospitals.
Police authorities were yet to react to the latest development at the time of filing this report.