The President, Major General Muhammadu Buhari (retd.), on Thursday, ruled out bail for the detained leader of the proscribed Indigenous People of Biafra, Nnamdi Kanu.

He said Kanu, who is currently on trial, was being given every opportunity under the law to justify all the uncomplimentary things said against Nigeria while he was in Britain.

This was as he reiterated his commitment, to leave office for the next administration in May 2023.

According to a statement by his Special Adviser on Media and Publicity, Femi Adesina, the President said this at a bilateral meeting with the British Prime Minister, Boris Johnson, on the margins of the 26th Commonwealth Heads of Government Meeting in Kigali, Rwanda.

The statement was titled ‘Another term for me? No! The first person who tried it didn’t end very well.’

On notions that Kanu was not allowed to see his lawyers privately, the President said the detained separatist is being given every opportunity under the law to justify all the uncomplimentary things he said against Nigeria while he was in Britain.

He felt very safe in Britain and said awful things against Nigeria, 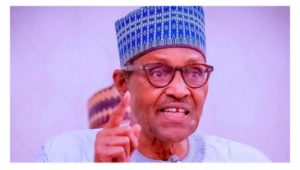 We eventually got him when he stepped out of the United Kingdom, and we sent him to court. Let him defend all that he said there.

He said considering Kanu’s jumping of bail earlier, the Federal Government may not consider granting him such a privilege anymore.