This is one of the very disturbing stories of our time as “Precious Eze’s Blog” can authoritatively report that the marriage between Nollywood veteran actor, Kanayo Modestus Onyekwere, popularly known as KOK in the movie industry and his wife, Nneka Onyekwere, nee Njoku has finally crashed.

This is not an assumption as KOK celebrated his 60th birth birthday in Lagos at the prestigious Muson Centre on the 29th of May and his wife was unnoticeably absent at the occasion which had the crème de la crème on the society present.

When this reporter asked one of the sons of KOK about the whereabouts of his mum, he quietly said it was a long story and didn’t say anything else, but when the same question was thrown at his very adorable daughter, she responded, but rather very silently “SHE DIDN’T COME BECAUSE SHE WAS NOT INVITED”, which was enough to tell that the marriage had crashed and that they don’t live together anymore.

The question, however, is, what could have happened to the union which had its traditional wedding conducted in the compound of Mr Titus Njoku, otherwise known as T.I Njoku, in Umueleke, Ehime Mbano Local Government Area of Imo State and how they’ve been able to keep this as secret and away from the public, to the extent that her family back in Umueleke are not even in the know of what happened?

The couple is blessed with four children, namely, Clinton Onyeze, Kosiochukwu Montel, Einstein Onyekwere and Uloaku Valarie, with three of them in attendance yesterday at the birthday party of their father, but the last one was not noticeable, possibly she couldn’t come with the mum who wasn’t invited to the occasion.

It was reported in October 2008 that KOK and his wife, Nneka attended a party, garbed in Ankara uniform and they sat together. When it was time to take photographs, the photographer beckoned to KOK politely to move closer to his wife and it shocked the photographer that KOK refused and looked the other way as the pictures were being taken, making it look like he would have wanted a trophy wife, instead of the Nneka Njoku he married, but he was not forced to marry her anyways

Going by what “Precious Eze’s Blog” had heard in the cause of investigating this story, it was discovered that KOK like his women, curvy and with a very massive behind, she doesn’t seem to whet his appetite enough.

The “Ihe Mbaise Ji Ka Mba’ as he is fondly called, which was the chieftaincy title given to him by his people in Mbaise, is sure living apart with his wife at the moment and we pray and wish they reconcile because of their lovely children 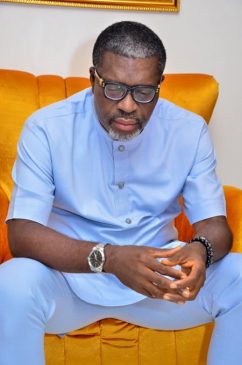 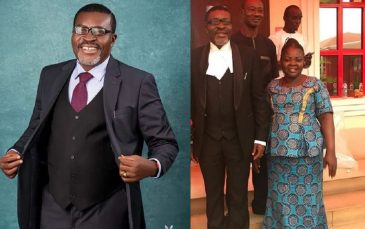