Governor Dave Umahi of Ebonyi State says the President, Major General Muhammadu Buhari (retd.) has approved political solutions for challenges caused by the Indigenous People of Biafra in the South-East. 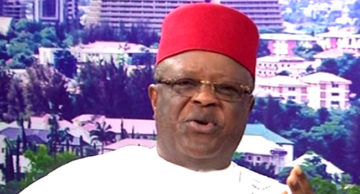 The governor said Buhari would be remembered as a man who did not use the plight of the people of the South-East to play politics but came to their rescue severally.

He stated this on Friday at a meeting between the president and South-East leaders in Ebonyi State.

He urged southern leaders to work toward finding a political solution to resolving some challenging issues, warning that the region is at ‘‘crossroads’’.

He said, ”On this issue of a political solution, I have never believed in IPOB’s method of operation, I disagree with them but we have gotten ourselves to a very terrible and pitiable solution.

“Some of us warned that we will get to this situation and some were playing politics with it.

”Mr. President, we are at crossroads. I have been to you and I have begged you for a political solution. Surprisingly and graciously you granted that. You said our people should initiate that and at the forefront is Nnamdi Kanu’s lawyer.”

The governor, therefore, urged the President of Ohanaeze Ndigbo to meet with elder statesman, Mbazuluike Amaechi, the Chairman of Christian Association of Nigeria, South East, the Chairman of South-East Traditional Rulers Council, Nnamdi Kanu’s lawyer and few others to initiate the political solution.

Earlier, Buhari said the Federal Government would deploy its strength to protect innocent and hardworking citizens from terrorists and those bent on causing social disorder in the South-East zone of the country.

The president expressed concern over the deteriorating security situation in the zone, reiterating his directive to security agencies to ‘‘flush out’’ those perpetrating violence in the land.

The president paid tribute to members of the Nigerian armed forces who recently lost their lives in the region.

“I must register my deep and grave concern with regards to the deteriorating state of security affairs in this region.

“In the last 48 hours, I have been informed of the latest in the round of brutal actions carried out by gun-wielding terrorists, who prey on innocent and hardworking citizens.

“Unfortunately, these barbaric acts were visited upon those who have committed their lives to protect their fellow citizens,’’ he said.

The president also listened to appeals by traditional, religious and political leaders in the zone for the release of the detained leader of the outlawed Indigenous People of Biafra (IPOB), Nnamdi Kanu.

‘‘I have listened carefully to the various appeals from the elders to the traditional leaders regarding a wide range of options, and as I have said previously this matter remains in the full purview of the courts where it will be properly adjudicated.

‘‘My worry is for our hardworking and innocent civilians, for whom life is already tough and would like to earn a decent and honest living.

‘‘There are many that fit this profile and the government owes them that obligation to protect lives and property.

‘‘I will once again repeat, no one has the right to carry an AK-47, and anyone seen in any part of the country doing so and is not a law enforcement officer is a threat to our peaceful coexistence and should be treated as such.”