The Nigeria Football Federation (NFF) has begun its search for a new head coach, after firing the former technical crew members led by Augustine Eguavoen, for failing to qualify for the 2022 World Cup in Qatar. 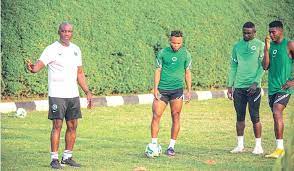 The federation has tasked its Technical and Development Sub-Committee to begin the search for the new handler.

The Executive Committee of the NFF took the decision on Tuesday after they met in Abuja to deliberate on important issues in Nigerian Football.

In a communiqué on Tuesday, the NFF Executive Committee, who tendered an apology to the country for failing to qualify for the World Cup, implored its Technical and Development Sub-Committee to, with a matter of urgency, begin the search for a new Eagles coach as well as other coaches for the home-based Eagles squad and other youth teams.

“The Executive Committee mandated its Technical and Development Sub-Committee to, within the next five days, make recommendations to the Executive Committee on coaching crews for the Super Eagles, the CHAN team, the U-20 Boys and the U-17 Boys ahead of upcoming assignments,” the statement reads in part.

“This is to ensure preparations for the next qualifying tournaments and championships commence in earnest.”

Reports say former Eagles coach Sunday Oliseh is in the running for the position, while Eguavoen on Monday also stated that he would love to return to the coaching position in the future.