The Alaafin of Oyo, Lamidi Adeyemi, is dead, 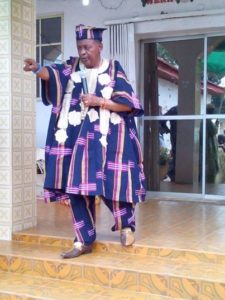 According to the Premium Times, Alaafin Adeyemi, the third from the Alowodu Ruling House, died in the late hours of Friday at the Afe Babalola University Teaching Hospital, Ado Ekiti.

The remains of the top Yoruba traditional ruler were brought to Oyo in the early hours of Saturday and traditional rites began.

He was 83 years old and the longest reigning Alaafin ever, having ruled for 52 years.

The Governor of Oyo State, Seyi Makinde, is expected to make an official announcement upon receiving the report of the monarch’s passing from the Bashorun of Oyo, Yusuf Akinade, who will now lead Oyo before a new Alaafin is installed.

Apart from being a traditional ruler, the 83-year-old king who had more than ten wives, many children, grandchildren and great-grandchildren was known for his wealth and interest in women, especially young and beautiful ones for marriage.

Infact the Oba Lamidi Adeyemi was the king with the highest number of beautiful Oloris in Nigeria.

Some of them are elderly, who are called Queen Mothers, but the vast majority are young beauties in their 30s and 40s.

Revealing how he got attracted to all his Oloris, the Alaafin of Oyo in an interview said “I did not propose to any of my wives. They desired to be with me because I sent them to school. After their university education, I told them to leave but they refused and insisted on staying with me here in the palace as my wives.

The least educated of them has a Higher National Diploma and is now in the University. I don’t begrudge or offend women. Marriage is an institution that must be defended.

Each partner has a role to play in the marriage. My wives have their individual quarters. God has given me some type of ability and grace to keep a woman, especially beautiful women. I don’t disclose my conversations or activities with one wife to another.

I maintain a strict code of confidentiality. I have learnt that I must positively make an impact on people and make a great first impression. Of course, they (wives) sometimes have disagreements and conflicts of opinion but I have been ‘graced’ by God to know how to ensure that the conflicts don’t escalate.” the Alaafin stated.

Prior to his death, the traditional ruler was always in the News for stories revolving around his wives, especially his younger Queens. From being given a lap dance by one of them, to the time he reportedly demanded a DNA test from one of his wives, Olori Omoh, after she was caught sleeping with another man in the UK and to the time he kicked out his youngest and Igbo queen, Chioma, from the Palace for her dealings with Yahoo boys.

May his soul rest.