Popular show host, Frank Edoho has spoken up about his past disagreements with the producers of the hugely popular game show ‘Who Wants To Be A Millionaire (WWTBAM)’. 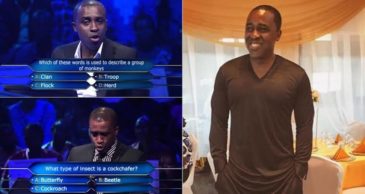 During an interview with The Will Downtown magazine, the broadcaster stated that he had demanded that he be promoted to executive producer by the program’s organizers, but that his demand had been denied.

Frank thought he earned the job because he had been running the show as if it were his own and needed more money.

“I asked to be an executive producer because for one, I had done the show for 13 years, so I felt that it was time for me,” he sai

“I couldn’t keep presenting this show that I did basically like mine anyway. So I needed a bit of the revenue but they weren’t open to it.”

Edoho also stated that he did not quit the show after his request was denied, despite the fact that the primary sponsors had left.

“I said, okay, let it not look as if I abandoned the ship when the major sponsor pulled out. I said if a new sponsor comes in, I want a part of the revenue,” he said.

“And already, they were telling me,no. We were still negotiating then all of a sudden, one beautiful Saturday morning, PUNCH now reports that ‘Frank has been dropped from WWTBAM.”