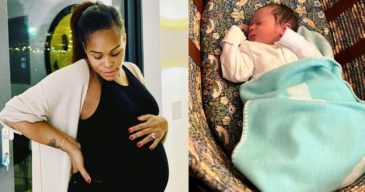 The excited new mum took to her Instagram page on Thursday to announce the good news.

Sharing a photo of the child, the 43-year-old revealed that the baby was born on Tuesday, February 1, 2022.

She also revealed the baby’s name, adding that words cannot describe how she felt.

Eve’s husband, 49-year-old Maximillion also took to his page to share the same post as his wife.

Eve had dated Maximillion for four years before they got married in 2014.

Though this is Eve’s first child, her husband has four teenage children – Lotus, Jagger, Cash, and Mini – from his previous marriage.

With this great news, Eve finally gets to be a mum after being a stepmum to the four teenagers over the years.

The rapper had in October 2021 shared pictures that displayed her growing baby bump, revealing that the ‘lil human’ will be born in February 2022.