Popular Nollywood Actress, Sidikat Odukanwi, also known as ‘Iyabo Oko’ is Dead. It has been reported in the nees hours ago that that the ailing thespian passed on Wednesday evening at 61-Years-old.

One of the Daughters of Iyabo Oko, Bisi Aisha, a female soldier, confirmed her death. She said: “May your soul Rest In Peace mummy”.

The actress had battled with terminal illness before her death.

A colleague of the deceased actress, Foluke Daramola-Salako confirmed her death on social media also.

“And finally we lost her.. RIP Iyabo Oko, we did our best but God knows best”

Iyabo Oko featured in such as ‘Iyabo Oko’, ‘Apoti Aje’, Sisi Mama’ and other wavemaking movies.
May God grant her eternal rest. Amin 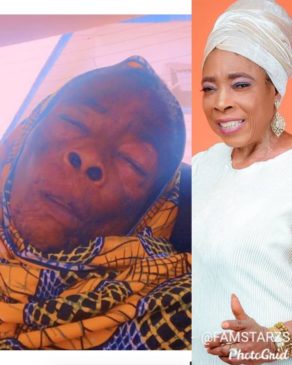