Although Olori Naomi is recognized as the first Queen in the palace, she and her family members who live with her, know categorically that the latest Queen Ashley cannot be toyed with.

Journalist Kemi Ashefon reports that they all know Ashley is a no-go area and the Ooni doesn’t tolerate any form of disrespect towards his beautiful Ashley.
Well, Ashley was unveiled as the latest queen during the 47th birthday of the Ooni in October 2021. Even Olori Naomi acknowledged the presence of some queens in the palace while giving her vote of thanks at the surprise party organised for the king.

She referred to Ashley as the Princess of the Source and prayed for more queens in the palace.

Not a few followers of the Ooni on social were surprised when Olori Ashley referred to the monarch as ‘my crown” in her birthday shout-out.

Meanwhile, with her non-profit organization, Afolashade Ashley Adegoke Foundation, Olori Ashley, who is a blue-blood, has succeeded in putting smiles on the faces of orphans, widows, single mums and the less privileged in society.

Queen Ashley would always refer to herself as a Princess of the Source.
On her Instagram page, she writes, “I am a princess of the source of Oodua… Aya Osha, Aya Adimula, Aya Olofin, Omo Olofin who can NEVER be duplicated, imitated or intimidated… Call me PAAA. AFolasade Ashley ODU Aya Orunmila.”

Moreover, she shares a throwback photo of her sitting on a royal chair in the Ile Ife palace in 2017.
She wrote on the post, “#throwback2017….To be a shining STAR… it comes with confidence… you must know WHO you are, WHERE you are from and WHAT you carry… don’t run anyone’s race… run yours.. shine your own light, follow your own path, don’t worry about any darkness or negativity because that’s when the stars shine the brightest… Aya Osha … Aya Adimula… Omo Oba… So proud of who I am… AFolasade Ashley ODU Aya Orunmila

This confirmed that her love affair with the king had been functional before the past and current queens.
To mark the sixth anniversary of the king on December 7, 2021, Olori Ashley wrote on Instagram:
Six years have flown by so quickly, I see and pray for many more years to come on the throne of your forefathers Omo Ajinaja Ogun. Akande Mii Ajiwe Fun’Osha, Okirikiribiti, Dagunduro Oko ODU… Iti Omo Irumole, Ekun ton fin tori tori, Ekun ton fin tiru tiru, Adigimala two fun fun, while others search for what they can take, you have taken the weight of the world on your shoulders and always search for what you can give back. Your ascension on the throne has changed a lot of lives not only in Ile-Ife but the entire black race. 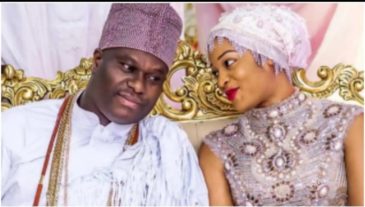 A true King’s power is his compassion which you show effortlessly. We acknowledge the good that we have in Yoruba land which is you my crown jewel and for us, it is the foundation for all abundance. Ade a pe Lori yin, Ase a pe lenu yin, thank you for all you do for humanity. To many more years on the throne of your forefathers, in good health and abundance of wealth. I remain Aya Oba, ODU Aya Orunmila, Aya Oosha, Aya Olofin Adimula, Omo Oba
Ooni married Olori Silekunola Ogunwusi in 2018. The couple welcomed their heir prince in 2020.