In his remarks while addressi 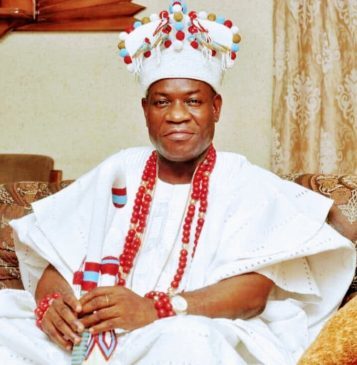 ng journalists shortly after receiving the award of Royal Ambassador, The Adeboruwa of Igbogbo, Lagos state, Oba (Barr.) Semiudeen Orimadegun Kasali said although he would always advocate that government increase funding to education among other critical sectors, parents, guardians and corporate organisations also have roles to play if the educational sector must be better.

The traditional ruler harped on the significance of education in securing the future of the country, noting that he would by the recognition be motivated to do more of the good works that qualified him for the honour.

Oba Kasali said, “I support the call for government to increase funding for education and there is an internationally acceptable standard and we would urge government to do more in that regards. I will continue to be an ambassador of the call that a large chunk of our budget should be allocated to education so that we can have an improved educational standards in the country.

“But, we know that government cannot do it alone, for instance, in my own little capacity in my domain, I have utilized every opportunity to mobilise resources for an improved education through construction of classrooms, award of scholarships to indigent students and we will continue to organise lectures to educate our wards on the dangers of joining bad companies and dangers of gangsterism in all ways.”

Also speaking, the Director of Program Operations, Children Community Services, New York, United States of America, Mr. Rafiu Afolabi Laguda said parents need to train up their children to be independent especially in their actions and decisions lamenting that many students fell to the trap of joining cultism as a result of peer pressure.

Laguda, a youth mentor and coach who was honoured with the Worthy Ambassador Award said getting the best of the country’s educational sector requires a collaborative effort from the government, parents, corporate organisations, and every other relevant stakeholders.

He said “Government is trying, parents need to support. When you talk about institutions abroad, it is not only government that is funding it. It is a collaborative effort.

“But in Nigeria, we tend to leave a bulk on the table of the government and we think that government is the superman to do everything and address all the problems. Parents, corporate institutions, government, all of us have roles to play in the educational development of our country. On cultism and hooliganism, these are social vices driven by peer pressure. We all had the option and choice to join cult but we did not when we were in school.”

“I know many youths who are well trained from home but who missed it when they got into campus. Parents must train up their children to be independent and learn to take independent decisions. Let them be accountable for whatever decision they take so that they know the task and responsibility ahead, let them know that they are always responsible for their actions and decisions.”

In her remarks, the Permanent Secretary, Oyo State Ministry of Women Affairs, Community Development, Social and Poverty Alleviation, Mrs Christianah Abioye, described the honour as a rude shock as she was not aware that her efforts in the fields of social work is being monitored.

She assured that the Worthy Ambassador Award conferred on her will help her expand the scope of her work and facilitate opportunity for more youths, less privilege and vulnerable to be impacted through a synergy with the UIAA and members of the community.

Abioye noted that government cannot handle all the issues facing the society alone but that some people have left everything in the hands of the government, adding “but it is not so. We need to come out as parents, elderly ones, brothers and sisters, teachers, neighbours, colleagues, we need to do it together. We need to change the society.

“We need to let the children who are not finding it easy know that it is a matter of patience and time while also encouraging them to concentrate on their studies and or vocation and let them know that they will through that part achieve lot more for themselves and the society at large.”